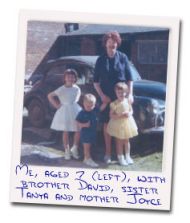 Helena Pielichaty (Pierre-li-hatty) lives in Nottinghamshire with her husband Peter and two children, Hanya and Joe. Her first book, Vicious Circle, was published in 1998 and was selected as one of the Book Trust's Top 100 books of that year. Since then she has had several books published, all with Oxford University Press.

I was born in Stockholm, Sweden, to an English mother called Joyce and a Polish- Russian father called Boris.

We moved to England when I was five. I lived in a small house in Garforth, near Leeds, with my parents, sister and two brothers. I had a lot of freedom and used to be either playing out on the 'pit hills' down the road, eating sweets, watching TV or reading a library book. My grandma and grandad lived across the road and ran a fish and chip shop.

I attended Barley Hill Infants School then Garforth Parochial Junior School. We moved twice during my secondary schooling. I went to Pontefract and District Girls' High School from Year 7 to Year 11 then Huddersfield High School for my sixth form.

I enjoyed going to school but wouldn't say I was outstanding at any one thing apart from talking a lot. Best subjects were English, history and art and worst were physics and singing. At secondary school I played netball for the school team and was the world's most enthusiastic but inept wing defence.

I can't remember having any one burning ambition, apart from wanting to marry David Cassidy. The only career talk I remember was about teaching. Guess what I became?